A few weeks ago, the topic of the “First Time User Experience” popped up in my Intro to Game Design Lecture.

For a while now, I’ve been trying to come up with an idea that would be a great starting post for this blog. However, recent events, both with the development of my final project for the semester and in my own gaming time, revealed to me that for my first blog post, the most fitting topic would be about the first time user experience. So without further ado … here’s to two “firsts”, I hope you enjoy!

At the end of most of my Game Design lectures, there’s a small in-class task or report to complete, and this lecture was no different. We had to pair up with a friend and play a game that we were unfamiliar, but that our partner had introduced to us, while the other recorded notes about our behaviour.

I went first, I quickly installed one of my favourites, Hacknet onto my laptop, opened it up, and then told my friend nothing for the next 15 minutes as he fiddled his way through the game’s unique text-based, linux-esque environment. It went relatively smoothly, though throughout the tutorial there were stretches of time where he got stuck, mostly because the tutorial required that he read. In his defence though, the tutorial doesn’t really go about making sure you KNOW that the text is actually on the screen, it hides at the side of the screen without much flashiness. By the time we were through the tutorial, it was my turn.

My friend opened up Stardew Valley and I ran into similar troubles, mostly not knowing what to do or why I was doing it. For example, the controls weren’t really explicitly given to me, so as I fumbled around town, I may have accidentally hit people with my hoe rather than strike up a friendly conversation with them. It was 15 minutes of fun and laughter, but it was also an interesting learning experience from a design aspect.

Flash forward about 3 or 4 weeks, and a group of friends and I are now collaboratively pitching some money in for an ARK: Survival Evolved private server, it’s been a fun way to relieve some stress and just relax with each other after developing for hours on end.

During our first few hours in the game, we were having a pretty good time building the foundations for our adventures ahead, though the conversation quickly shifted gears, as it seems that it is now impossible for us to play a game without analyzing its design.

Before we get into that, let me just say that I’ve owned ARK for well over a year, but when I bought it, the game performed less than optimally on my PC. Even so, I still considered it to be a really fun and unique concept for a game, and its story was intriguing. However, when I finally got back to it a few days ago, I had forgotten most of the controls, meaning that the only person who knew anything about the game was one person out of the six of us.

Anyways, back to the topic at hand … After what seems like a bazillion questions and even more in-game deaths, we came to the realization that the game’s learning curve probably turned a lot of players off really early on, which is unfortunate, because it’s a legitimately fun game to play, especially with friends. 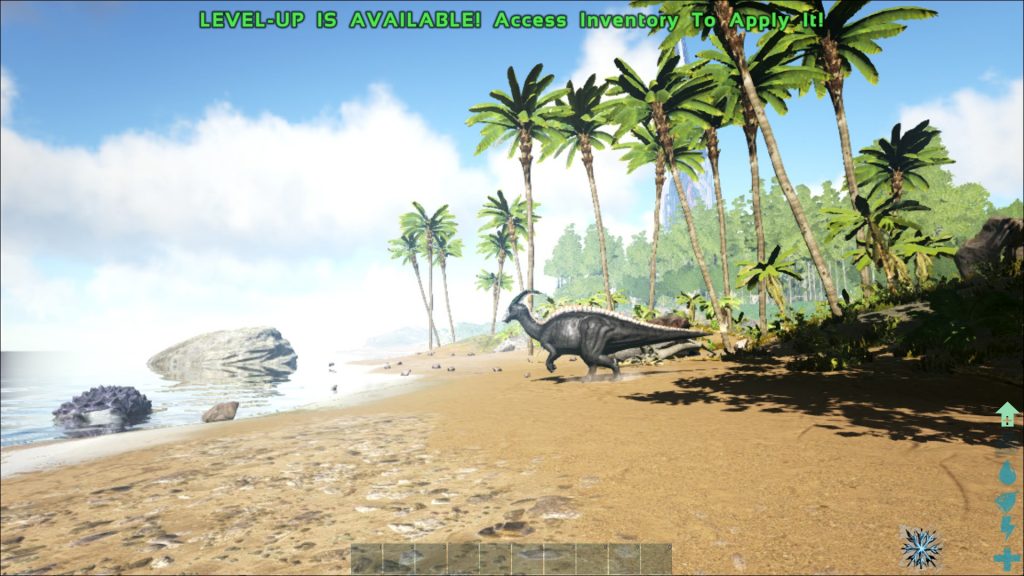 We discussed a few issues though, firstly there’s no very obvious way to tell what the controls actually ARE. For example, even after rummaging around the island for a little bit, right after you spawn and gain enough EXP, you’re presented with a level up notification that prompts you to open your inventory, but the question still remains: how?

The game doesn’t explicitly tell you how to open your inventory to level up, just that you have to do it.

Now, this could be part of the design as well, ARK is a fairly hard-core survival game, so it could be that the designers expect you to figure things out for yourself, which is fair enough, but then you do run the risk of frustrating your players early on in their play sessions.

Personally, I like to figure games out for myself, so a quick look into the control settings isn’t a huge inconvenience to me, and after you figure out the base mechanics, the game is really fun.

Luckily, the devs have recently added a “Survival Guide” into the game, which should aid newer players who are confused.

I also really appreciate the screenshots the devs included for each portion of the survival guide, they’re very visually appealing.

I do think that an integrated tutorial would do better than a text-based one, and this sort of goes back to my points about text-based tutorials in Hacknet. Some people just don’t like to read (which is an ironic statement, coming from someone writing a blog post).

At the end of the day though, I still really do love ARK, and I got into the game near the early stages of development. It’s nice to see that the devs have stuck with it, and they’ve done a stellar job at optimizing the game, too.

Overall, learning about First Time User Experience has given me A LOT of insight into how games are made, and how to design them to introduce your players to your game in a friendlier manner, and I’ve also realized how easy it is to forget. My team and I forgot to add a “How to Play” section into our final game of the semester, so whenever a prof visited our game booth, we had to explain the controls to them. Fear not though, we did add a “How to Play” section later on.

I hope this first post gave you a good first reader experience and gave you an idea what to expect from me. I’ll try to keep posts shorter next time, this is probably the longest they’ll ever get, just over 1000 words, and I won’t always be picking apart certain games or their design, either.  I’m really looking forward to the next four years of school and –hopefully- this blog.

I encourage you to comment your thoughts on my post, give me suggestions and help me shape this blog for the future. See you in my next post, and thanks for reading!